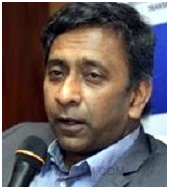 Currently associated as Head & Chief Surgeon with Department of HPB & Liver Transplant Surgery at Global Hospitals, Chennai
Renowned surgeon known for his expertise on liver transplantation and hepatopancreatobiliary (HPB) surgery and performed more than 3000 liver transplant surgeries so far
In Dec 1997, a team led by him has done a successful liver transplantation for a five-day-old girl, which made him an entry into the Guinness Book of Records in 2000
Carried out the first living related Liver Transplant on a patient with acute Liver Failure in the UK
Successfully done a liver transplant for a four-and-a-half-year-old girl suffering from a terminal stage liver disease.
Participated as part of a team from King’s College Hospital, London which did liver transplant(s) six times for a patient to save her life by performing a bone marrow transplant
A team led by him has successfully done Swap liver transplantation on Adults (first of its kind in India), at Global Hospitals & Health city, Chennai
Research interest is in the field of liver regeneration and harnessing its potential in making liver surgery safer for liver donors, liver recipients and for patients with advanced liver tumors