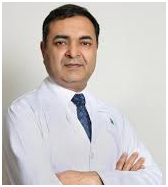 Dr Sudheer Kumar Tyagi is a well –known Neurologist in Delhi.With an experience of over 20+ years, and has been trained at some of the premium institutes both nationally and internationally.He has done his MBBS & MS from University of Lucknow. Following which he did his McH from the prestigious All India Institute of medical Sciences.Dr Tyagi has undergone specialized training in the fields of neurovascular and skull base surgery at clinical centre Ljubljana, Slovenia under Prof. Vinco .V. Dolence who has a world authority in these fields.He has also completed his training of Stereotactic Functional Neurosurgery at St. Vincent Hospital Sydney and also a hands-on training of Spinal Cord Stimulation at San Francisco USA.He has performed more than 4000 neurosurgical procedures since his neurosurgical training.Dr Tyagi has pioneered the functional stereotactic surgery programme at Apollo Hospital New Delhi, India.He is known for his Frameless Stereotactic Navigation work in cases of epilepsy caused by small lesions which are close to eloquent areas of brain.Dr Sudheer Kumar Tyagi’s area of interest lies in deep brain stimulation surgeries and ablative surgery, stereotactic radiosurgery.