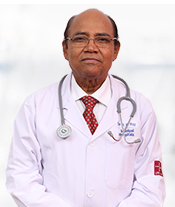 Dr. AK Roy is a renowned neurologist in Bangalore, with over 39 years of experience of treating neurological disorders. He is currently associated with Manipal Hospitals as a Consultant Neurologist and St. John’s Medical College as a Professor. Dr. AK Roy completed his medical graduate from Prince of Wales Medical College Patna in 1969, MD in Medicine from Armed Forces Medical College Pune in 1977 followed by DM in Neurology from All India Institute of Medical Sciences New Delhi in 1979. Further, he participated in a fellowship program from Indian Aerospace Society in 2006, Indian Academy of Neurology in 2007 and Indian College Of Physics in 2008. He was also a part of Paul Harris Fellowship of the Rotary International in 2010.

Dr. AK Roy has several awards to his credit including ‘Health Professional of the Year’ by International Biographical Centre in 2005. He was also appointed as an Advisor to Union Public Service Commission, Government of India New Delhi. Dr. AK Roy has treated several patients suffering from neurological disorders in India and gives every patient the best of medical care.