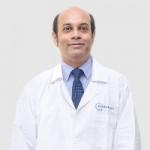 He has successfully treated patients from different parts of the country as well as international patients from the Middle East and Africa.