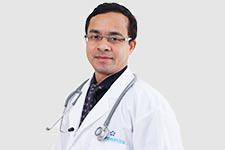 Dr. J. Srinivas has done his MBBS from Gandhi Medical College, Hyderabad, in 1999. After completing his M.S. General Surgery from Kakatiya Medical College in Warangal in the year 2003, he joined Nizam’s Institute of Medical Sciences from where he completed his M.Ch Neurosurgery in the year 2008. He joined Apollo Hospital – Karimgarh in A.P. as a Consultant in Neurosurgery, where he worked for 1.5 years. He then moved on as a Consultant in Fortis Hospital, Kota. After brief stints as a Senior Consultant Neurosurgeon at Global Hospital, Hyderabad, & KIMS, Bilaspur, he joined as Director Neurosciences at AIMS, Dombivali, where he served for 2 years before joining us. He brings with him a vast experience in treating neuro-trauma, neuro-oncology, skull base, spine, steriotaxy& functional neurosurgery. His special interests lie in micro neurosurgery, neurovascular surgery, epilepsy surgery, and deep brain stimulation surgery. He has also conducted various workshops on minimally invasive spinal surgeries.