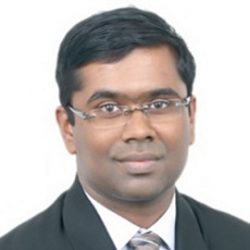 He has a wonderful surgical pedigree and has worked and trained at some of the most competitive and reputed institutions in the world. Dr. Mohan K P graduated from Bangalore Medical College in the year 2001 and pursued his MS Orthopedics at Madras Medical College and passed out with 2 gold medals after topping the university for the entire state of Tamil Nadu. He has worked at PESIMSR as Assistant and Associate Professor of Orthopedics taking care of large number of trauma patients in a teaching setup for 4 years. He then moved to the United States to pursue further surgical training under Dr. Kenneth Krackow, one of the inventors and early pioneers of Uncemented Total Knee Arthroplasty being selected from a highly competitive candidate pool from across the world. He was then selected by the prestigious Harvard University to pursue Fellowship training in Pediatric Orthopedics at Massachusetts General Hospital- the birth place of modern Anesthesia. He has worked with leaders in Pediatric Orthopedics like Brian Grottkau, Maurice Albright, Saechin Kim and Gleeson Rebello thus acquiring the necessary skills in this challenging specialty to take care of the vast problems presenting in Pediatric Orthopedics.

His academic interest is reflected by his teaching experience and a large number of students both undergraduate and post graduate who have trained and learnt from him. He has presented in various national & international conferences, has a significant number of journal publications and textbook chapters to his credit as well.