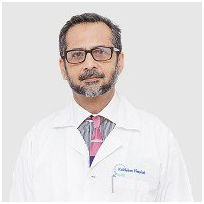 Dr. Mohit Bhatt heads the Centre and has set up the Movement Disorders Programme at Kokilaben Hospital. He is responsible for the medical management of patients with movement disorders including selection of patients who will benefit from Deep Brain Stimulation (DBS) surgery. Dr. Bhatt had his entire medical training at the Grant Medical College (GMC) and Sir J. J. Group of Hospitals in Mumbai. In addition, he has trained in the best institutes in the world in the field of Movement Disorders. Before joining Kokilaben Hospital, he was attached to Breach Candy Hospital and Jaslok Hospital in Mumbai.Dr. Bhatt is the Founder Trustee of Parkinson’s Disease Foundation of India (PDFI) and of Basal Ganglia Club, India (BGC). He is a member of the steering committee of Asian Oceanian Parkinson’s Disease and Movement Disorder Society (AOPM) chapter of Movement Disorder Society.
Clinics In-charge of

Professional Highlights
Dr. Mohit Bhatt is a keen researcher and has contributed to understanding of the disease mechanism and treatment options of various Movement Disorders. He has to his credit over 60 publications in leading international medical and neurological journals. He has also contributed book chapters to numerous neurological textbooks. His present research interests include study of Wilson’s disease, Brain Iron Disorders, Parkinson’s Disease, Progressive Supranuclear Palsy (PSP), Deep Brain Stimulation (DBS) and functional neurosurgery application to Movement disorders and neurogenetic diseases. Dr. Bhatt’s experience in diagnosing complex neurological and movement disorders is unmatched and he is a much sought after speaker at national and international neurological conferences.

Get a FREE quote