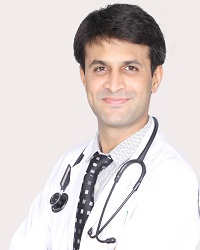 Dr. Naveen Polavarapu is a Consultant Gastroenterologist and Transplant Hepatologist, with the titles of MBBS, MRCP (Edin), MRCP (London), FRCP (Gastro) and CCST (Gastro) to his name. Specialising in transplant hepatology and hepatobiliary medicine, he is currently attached to the Apollo Hospital in Jubilee Hills, Hyderabad. He has a keen interest in advanced endoscopy, pancreaticobiliary and advanced hepatology.

After his MBBS, Dr. Polavarapu worked in hospitals in India viz. Indraprastha Apollo Hospitals, Jain Medical Centre, New Delhi, and the Government General Hospital, Vijayawada, before moving to the United Kingdom. There, he initially took up postings as House Officer and SHO in various departments at Tameside General Hospital, Furness General Hospital (Barrow), James Cook University Hospital (Middlesborough) and Friarage Hospital (Northallerton). He moved to the Trafford General Hospital (Manchester) in October 2006 where he spent 11 months in the department of gastroenterology.

His next postings were as Specialist Registrar from September 2007 to February 2013 at Leighton Hospital (Crew), University Hospital of Aintree (Liverpool) and Wirral University Teaching Hospital (Wirral). He also undertook the OOPE (advanced endoscopy fellowship) during the fourth year of this tenure. Whilst at University Hospital of Aintree, he gained valuable insight into per oral cholangioscopy (spy glass), diagnostic and therapy (EHL) for large CBD stones. Subsequently, on concluding the CCT Liver Transplant Fellowship, he worked at the Queen Elizabeth Hospital, Birmingham, where he spent five months in the hospital’s liver transplant unit.

Dr. Naveen Polavarapu has also been involved in training, having delivered lectures and clinical sessions internationally, nationally and locally to doctors, nurses and undergraduates. He has attended various courses on effective teaching and presentations, and played a major role in organising five weeks of PACES teaching in 2006. He has also been a frequent assessor for case-based discussions, and is a certified trainer in endoscopy, besides being familiar with management and administrative procedures. He has several publications to his name in renowned journals, which have also been presented by him at conferences.