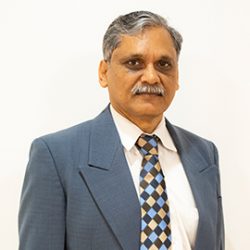 Dr S.S.Praharaj, has over 20 years of experience as a consultant Neurosurgeon. He has performed over 6000 Neurosurgical Operations including Complex Cranial and Spinal Operations. In the course of his neurosurgical career, he has rendered invaluable service at institutes like All India Institute of Medical Sciences (A.I.I.M.S, New Delhi) and NIMHANS, Bangalore, in India and also abroad. He has performed Spine Surgery and Spinal Instrumentation of all kinds at NIMHANS, Bangalore and has also been a pioneer of Neuro-surgical Procedures such as Cervical Laminoplasty, Anterior Cervical Plate and Screw Fixation, Cervical Lateral Mass Fixation, Transthoracic Approaches and Fixations, Thoracolumbar Transpedicular Fixations, Posterior Lumbar Interbody Fixations, etc.

He is an active member of various organizations such as Neurological Society of India, Neuro-otological Society India, Asian Congress of Neurosurgeons. He has presented and published papers at national and international levels and been awarded many times. He was also chosen as the “Neurosurgical Update for Young Neurosurgeons of Asia” at Osaka, Japan, 1998.

He completed his M.B.B.S degree in 1984 and MS (Gen. Surgery) in 1988 from G.R.Medical College, Gwalior India. He also completed his Diplomate National, Neurosurgery (National Board Exam, 1992) from New Delhi and did his MCh (Neurosurgery) from Sree Chitra Tirunal Institute for Medical Science and Technology Trivandrum, (An Institute of National Importance) in 1991. In the field of research, he has presented many research papers worldwide and also published more than 20 papers and chapters. He has also been actively involved with study of Critical Care Management of Head Injury. He evolved a protocol based management of severe head injury so as to maintain an optimum CPP and measure the cerebral compliance. He was also the main investigator for conducting the Multicentric International CRASH trial (Corticosteroid Randomisation after Severe Head Injury). To his credit, he holds many best paper awards at national and international levels, including best paper awards at British Neurological Research Conference in Chollerford, UK. He has visited the Dept of Neurosurgery, Baylor College of Medicine, Houston, Texas and worked as Research associate in head injury there for 9 months under Professor Claudia Robertson. In the field of Manpower Development, he has been actively involved in the teaching and training of MCh students of medical institutes and has conducted workshops on SAH and  AVMs under the aegis of WHO for General Practitioner (GP) and also involved in training and teaching assistant surgeons who are deputed by the Karnataka Government from time to time for Head Trauma Management Training.

Worked with NIMHANS as Consultant Neurosurgeon & Addt Professor of Neurosurgery Fellowship in Neurosurgery in UK and USA ( Baylor College of Medicine, Houston)