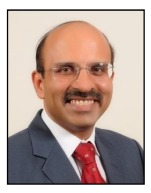 Dr. Sanjiv Pravin Haribhakti is a senior and qualified GI Surgeon from Ahmedabad, practicing for 19 years in Ahmedabad. He is the First M.Ch. GI Surgeon of Western India.At present he is Chairman, Department of Surgical Gastroenterology at Kaizen Hospital, Ahmedabad – Gujarat’s First Gastroenterology Super Speciality Hospital.

He has to his credit 28 published papers in National and International indexed journals.He is an avid academician and is an editor of textbook – “Haribhakti’s Surgical Gastroenterology”, and has produced “DVD Atlas of Laparoscopic GI Surgery” for surgeons. He has initiated an online resource in GI surgery, www.gisurgery.info for education of Surgeons and Patients.

He has also designed and innovated a table mounted abdominal retractor “Haribhakti’s Self Retaining Retractor” for abdominal surgery, and “Hammock Retractor” – a scarless retractor for laparoscopic surgery. He has organized 12 National Conferences such as IASGCON 2014, ACRSICON 2007, MAS 2003,
LAPGICON 2004, GIUPADATE 2005 among others. He has also presented his work at international meetings such as DDW 2003, SAGES 2008, DDW 2010 and World Congress of Digestive Surgery(WCDD) at Nanjing, China in Dec 2015. He has been invited to more than 10 International and more than 100 National Conferences as Faculty.

He has been trained extensively at the best centres in India and abroad
He has extensive experience in treating complicated patients having advanced GI surgical diseases. He has special expertise and experience in Laparoscopic Restorative Proctocolectomy and Ileal Pouch for Ulcerative Colitis, Acute Severe Necrotizing Pancreatitis, Laparoscopic Whipples Operation for Pancreatic & Periampullary Cancers, Colon Replacements for Corrosive Strictures of Oesophagus, Surgeries for Portal Hypertension, Laparoscopic Cardiomyotomy for Achalasia Cardia and Laparoscopic Fundoplication for GERD.