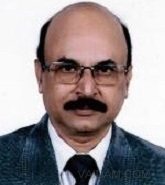 Dr. W.V.B.S. is a renowned and respected ENT Surgeon and Oncologist of India. He obtained his MBBS Degree from MKCG Medical College in the year 1979. Thereafter he pursued MS in ENT from the Armed Forces Medical College. Over the years, he has attained fellowship in Head and Neck Onco Surgery from various distinguished national and international institutions, such as, Tata Memorial Hospital, Mumbai, Memorial Sloan-Kettering Cancer Centre, New York, and Netherland Cancer Institute, Amsterdam. He has also been granted Fellowship in CO2 Laser Surgery from University of Gottingen, Germany, UICC Fellowship in Phoniatrics from University of Freiburg, Germany, and UICC Fellowship in Skullbase Surgery from University Hospital of Pittsburg, USA. He carries with him an extensive experience of 30 years of serving the Armed Forces of India. He has also served as a Professor at various prestigious institutions of India, such as, Armed Forces Medical College, Army College of Medical Sciences, and Army Hospital (Research and Referral). Dr. Ramalingam is an acclaimed surgeon of national repute, and has to his credit rare distinctions such as, Chief of Army Staff Commendation, and General Officer Commanding in Chief Commendation. He also possesses key memberships, such as, President of Laryngology and Voice Association, Founder Member of Foundation for Head and Neck Oncology, Life Member of Association of Otolaryngologists of India, and Life Member of Association of Phonosurgeons of India.